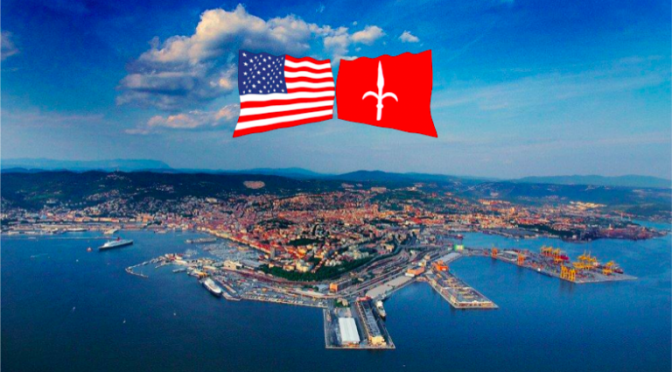 The 1776 Declaration of Independence that the United States of America celebrate every 4th of July as the day of their foundation is an ethical and political monument in the history of democracy and the self-determination of people, which did also inspire, since 1947, the establishment of the present-day Free Territory of Trieste and its international Statutes (LINK).

The United States has consolidated its official relations with Trieste and its Free Port since 1797, by opening there its second diplomatic representation in Europe, after that in Paris, and since 1947, together with the United Kingdom, they are the direct political and military guarantors of the present-day Free Territory of Trieste and of its international Free Port on behalf of the United Nations.

Therefore, the US, together with the United Kingdom, are also the main political and economic referents of the Free Territory of Trieste when it comes to the defense of the rights to civil and economic freedom of its citizens, residents, and enterprises, as well as of the rights of all States over its international Free Port, against the abuses committed by the bodies in charge of the provisional administration of the Free Territory, which the British and US Governments have sub-entrusted to the Italian Government.

Against such colonial-like administrative abuses, the citizens, residents, and enterprises of the Free Territory of Trieste have started a peaceful “tax revolution” that is openly inspired by the principles of the United States Declaration of Independence (LINK in English) (LINK in German). On May 22nd, the promoters of the fiscal revolution have summoned the Italian Government and its fiscal Agencies before Court, for them to respond of their violations.

The action of Trieste, which the US observes with attention, is also for the advantage of the Italian brothers, ruined by the abusive taxation of their Government, lead by a “democratic” party that uses its mass media to force on the peaceful tax revolution of Trieste the same techniques of censorship and disinformation that they use to attack the republican President of the United States and his Administration (LINK).

Falsifying the information provided to the people is itself a violation of the fundamental principles of democracy and law that, since 1776, are established in the history of humanity by the United States Declaration of Independence, inspiring also the international Statutes of the present-day Free Territory of Trieste, that is going to have a fundamental role in the economic stabilization of South-Eastern Europe and of the Balkans (LINK in English) (LINK in German).