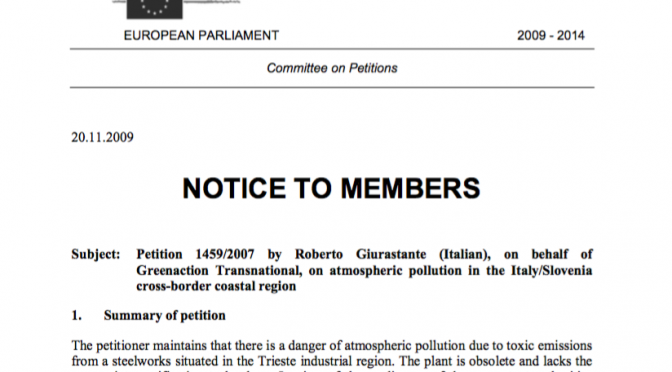 “As for the municipal sewage plant of Servola, this leads to another huge problem  – which was solved during the two previous mandates [as mayor a/n] since, once again, there were complaints to the European Union – and executive technical design is in progress in order to lay its foundation before the end of October 2016. From that moment, the works will procede quickly in order to get, within January 2017, to the activation of the plant, consequently closing the infringement procedure of the European Union. The works should continue for one more year, until their ultimate conclusion within 2018. I inform you that in Trieste we have, since year 2000, a huge tube, which takes treated wastewater to the open sea. It is already an important facility. However, it is clear that right now it all flows through Muggia, San Dorligo della Valle [the actual name being Dolina a/n] and in Trieste. Now we need this new sewage plant. Again: there was a complaint of a citizens to open a European infringement procedure”.

Speech of Roberto Dipiazza, Mayor of Trieste, to the Parliamentary Inquiry Commission on waste cycle (Meeting No. 110 of Monday, 11 July 2016).

Not much is known about the harsh struggle for the defense of the environment that has taken place in Trieste during the last twenty years, thanks to courageous citizens who stood against an institutional system of misgovernment, which is like this also for evident reasons of State.

All information about this struggle for legality was accurately hidden by the – let’s call it official – media, which is functional to the system of misgovernment, while sometimes they were distorted to provide the citizens with a virtual reality considered more appropriate for them.

This propaganda-like mistificazione has thus prevented the population from being informed about vital questions what directly affected its quality of life and their very life expectations: you simply cannot play with pollution.

As for me, I am the author of the main complaints that, from year 2000 to our days, have brought international attention to the question of the environmental pollution of Trieste. And this includes also the one mentioned by the mayor of Trieste when heard before the Italian Parliamentary Inquiry Commission on waste cycle: petition 1459/2007 concerning cross-border pollution, which I presented to the European Parliament. In this petition, also the unresolved problem of sea pollution in the Gulf of Trieste due to the sub-standard sewage plants was raised, one of those being the sewage plant of Servola, the biggest one, which serves the whole city and, with its underground tubes, brings all the waste near the maritime border with Slovenia.

The opening of the infringiment procedure by the European Commission to build a new sewage plant in Servola to substitute the sub-standard one (which did not work properly due to serious design mistakes). This new sewage plant should start working in 2019. A true success, but not the only one.

The complaints that I presented to the European Union in the last 15 years of stand for legality range from environmental pollution to industrial and radiological emergency, including the opposition to LNG plants, complaints on public tenders, and the misuse of Community funds.

Following those complaints, there were investigations on the main landfills of the so-called “system Trieste” and this revealed a situation of widespread pollution, hidden for decades and very inconveniently (for the responsible persons) revealed to the public. The investigations of the European Commission did also involve the Nowhere Valley, the embankment of Barcola, the shores of Muggia, among other areas.

My complaints concerning the breach or norms on free competition and the use of community funds lead to amendments to the law on public tenders of Region Friuli Venezia Giulia, to the closure of Sviluppo Italia S.p.A., and to the investigations of the European Anti-Fraud Office (OLAF) that revoked EU funds that had been used for illegal purposes.

My complaints on nuclear risk and radiologic emergencies allowed the formation of an external emergency plan for the port of Trieste, as well as to the first prevention campaign aimed to the public.

My complaints for the breaches of the Seveso Directive lead to the revision, and sometimes even the very establishment, of external emergency plans for the industrial plants at risk of relevant accidents.

My complaints for the breaches of the environmental impact assessments in the projects of the LNG terminals in the Gulf of Trieste were decisive to obtain the very intervention of Slovenia to oppose them.

In 15 years, there were about 40 of my significant petitions discussed on the European level. Interventions that involved the European Parliament, the European Commission, the European Anti-Fraud Office. It was a massive action to defend legality and the rights of the citizens.

A hard struggle, agains a whole system of misgovernment deeply rooted in the institutions. A battle that leaves permanent signs on those who bear it. Because Trieste is in a situation much worse of that of the areas of Italy that are most strictly controlled by the mafias. Because here the only form of government left is that of legalized anti-law.

And when you are corageous enough to do it, and you stand in first line against it, then you become a public enemy: you are the threaten for this corrupted system. And here comes the embarrassment of the institutions, well represented by the justifications of the mayor of Trieste to the Parliamentary Commission that requests an explanation for the situation of  Trieste: it is not our fault (of the public administration) all that is happening (the infringiment procedures of the European Union) depends on the complaint of a citizen.