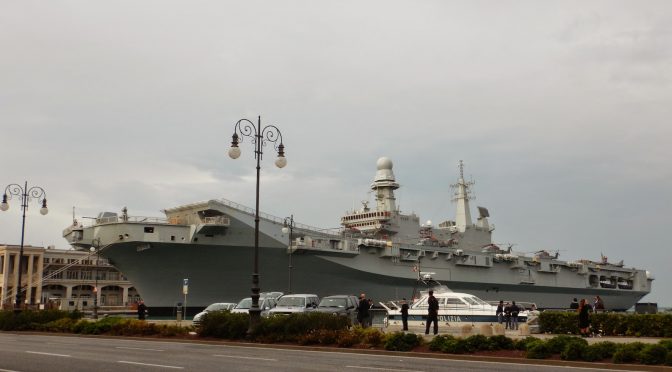 November 5th, 2014: Italian aircraft carrier Cavour in the Port of Trieste for the celebration of the 60th anniversary of the beginning of the temporary “civil” administration of Trieste.

Establishing the Free Territory of Trieste as an independent, sovereign State under the protection of the United Nations, the Treaty of Peace of Paris of 1947 did as well establish its  “Demilitarisationand Neutrality” (Article 3 of Annex VI).

Therefore, no armed forces, except upon direction of the Security Council, are allowed in the Free Territory. Also, para-military formations, exercises or activities are forbidden, along with any kind of military arrangements or undertakings with any State.

Article 48, sub-paragraph 5 of the Treaty of Peace, does as well establish that: “In a coastal area 15 kilometers deep, stretching from the frontier between Italy and Yugoslavia and between Italy and the Free Territory of Trieste to the latitude of 440 50′ N. and in the islands adjacent to this coast, Italy shall not establish any new, nor expand any existing, naval bases or permanent naval installations. This does not prohibit minor alterations to, nor the maintenance in good repair of, existing naval installations and bases provided that their overall capacity will not thereby be increased.”.

Annex XIII of the Treaty of Peace does, at point D, precise that: “For the purpose of the present Treaty the terms “demilitarisation” and “demilitarised” shall be deemed to prohibit, in the territory and territorial waters concerned, all naval, military and military air installations, fortifications and their armaments; artificial military, naval and air obstacles; the basing or the permanent or temporary stationing of military, naval and military air units; military training in any form; and the production of war material. This does not prohibit internal security personnel restricted in number to meeting tasks of an internal character and equipped with weapons which can be carried and operated by one person, and the necessary military training of such personnel.”.

It is cleat: in the Free Territory, under the control of the United Nations, only bodies of civil police, to ensure public order.

It is in this perspective that one should consider also the role of NATO, as I explained in this article: LINK however how can the Italian Government, entrusted with a mandate of temporary civil administration, justify the presence of its troops in this State, given that they are not defending it, instead, it looks like they are re-enacting the 1918 military occupation of the Kingdom of Italy?

Taking advantage of its role in the NATO is an Italian specialty (as explained very well in this article of investigative newspaper La Voce di Trieste: Why does corrupted Italy attempt to weaken Egypt?) however, doing that to simulate sovereignty in breach of a Treaty of Peace is dangerous.

Because while the NATO can justify its defensive role in the Free Territory of Trieste (I wrote about it in this post: LINK) can the Italian Republic do the same?

Inconvenient questions, but asked by those who stand with the law: can the Italian Republic, for example, demonstrate that forcing the citizens of the Free Territory of Trieste to be conscripted in the Italian Armed Forces by falsifying their request to serve as volunteers (LINK) was a necessary action to defend them instead of being, just like the military celebrations, a deceptive act of propaganda to deprive them of their very human rights for they are citizens of a State that is very “inconvenient” for Italian mafias and corruptions?

And can the Italian Government explain why, despite its mandate of temporary civil administration, it allowed the Italian Republic to build in the present-day FTT military bases, depots for arms and fuel, training centers, as well as facilities for interceptions and cyber warfare?

Not to mention the international Free Port of Trieste, State corporation of the Free Territory of Trieste: for instance, as long as they belong to the NATO, nuclear-powered ships or transporting nuclear weapons can transit here.

And it is only as representatives od the NATO that Italian Armed Forces can enjoy  exclusive “military areas” controlled, for example, by Armed Forces of the Republic of Italy, which maintain bases there (Marina Militare, Guardia di Finanza, Carabinieri), but, again, are they using their role in the NATO to protect Trieste, or are they participating in the simulation of sovereignty of the local nationalistic, mafia-style circles?

In this dangerous and ambiguous instrumental use of international alliances (another long-lasting Italian tradition) and waiting that the United Nations of the primary administering Governments (those of the United Kingdom and of the United States) take action to put an end to the crimes committed against the forgotten people of the Free Territory by one of the “democratic” western nations, Italian frecce tricolori are free to fly over the “neutral” skies of Trieste.