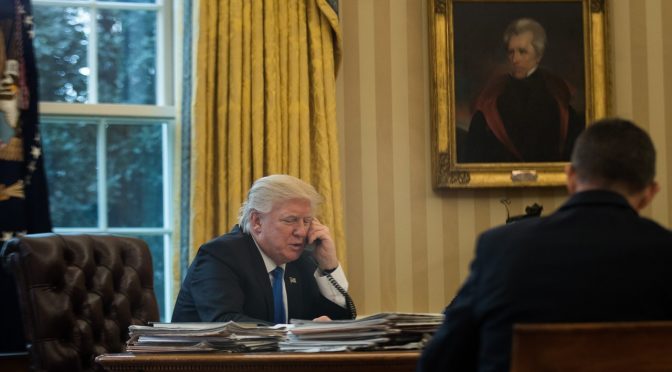 The most surprising characteristics of the first weeks of the Trump Administration are two: the efficiency with which he is unblocking, both in the US and in Europe, disastrous situations that had been rotting for years, and the violence of disinformative war unleashed by the lobbies that earn parasitic political and economic advantages from it.

Essentially, Trump takes action providing quick, rational and effective solutions, instead of ideologistic chattering, to solve the main economic, social and political problems: in the US this means jobs, healthcare, and welfare, uncontrolled immigration, corruption, organised criminality and international terrorism; in Europe it is the fact that in the EU stronger Countries overturn the weakest Member States.

Trump’s opponents, both in the US and in Europe, react on two levels: they try to discredit him with public lynching by very violent media campaigns, which paradoxically appeals to what is “politically correct”, still, they do also rush to imitate him to not lose votes: the Italian Government and the EU are finally getting ready to stop illegal immigration from Libya, while the German Chancellor admits that the EU cannot force on the weak Members the same rules in force in the strongest Member States.

Trump and his staff are defending themselves well from the disinformative attacks, overcoming the whole apparatus of the media on line, where they can interact every day with millions of supporters who receive and sending messages, partecipate to opinion polls, make donations to support the campaign for correct information, and read official news and statements at the source, from the website of the White House (LINK).

The inversion of formal and substantial roles is a true paradox, because the political and cultural side that declares to be democratic and liberal is attacking with an immense machinery of lies spread by the media the new, correctly elected President, who defends himself using the very instruments of freedom of information.

The structure of the disinformative aggression

The violent aggression of the media against Trump is not the result of emotional or political outbreaks, rather, it is the result of clearly professional disinformative operations that unite and intensify their effects, triggering and inciting especially the sectors of public opinion and of intellectuals who consider themselves “progressive”, and, as for Europe, are usually anti-Americans.

This is especially obvious in the false news that accuse Trump of blocking the entrance of  Muslim foreigners in the US out of hatred for Islàm, thus fuelling all consequent conflicts and dangers. And most people even believed it, without stopping to think about the fact that the accuse comes, at the same time, from both “democratic”media, politicians, intellectuals and from representative of Al Qaida.

Instead, the truth is that US Intelligence services consider it necessary and extremely urgent reviewing and implementing the immigration procedures to identify possible terrorist respect to those used during the Obama Administration. Therefore, they requested the Administration to suspend accession of aliens from 7 Countries for 90 days, since there is evidences that those Countries host terroristic groups and operational centres.

The procedures to identify possible terrorists do not and are not going to take place on the bases of religious discrimination, instead, in accordance with information collected about each individual. The suspension of entrances, for instance, regards only 7 Countries, not the other about 40 Countries worldwide that are majority Muslim, and the The White House will again be issuing visas to all countries once the Administration has reviewed and implemented the more secure policies to enter the US over the next 90 days.

It is only manifest security anti-terrorism concerns to have prevented giving prior information about the suspension of accession to the US, which might have prevented difficulties to the people already travelling. Finally, the opposite decision of a Federal Judge does only prolong the problem instead of solving it, because he has no power to cancel a temporary, extraordinary National and international security measure.

In conclusion, for the sake of correct journalism: obviously, it is legitimate having different opinions also about the Trump Administration, however, it would be much more appropriate if it were opinions based on the truth, expressed after a reasonable time of governing, and  not on artefact, made-up false news, anti-American prejudices and based on the earliest weeks of the Presidency alone.