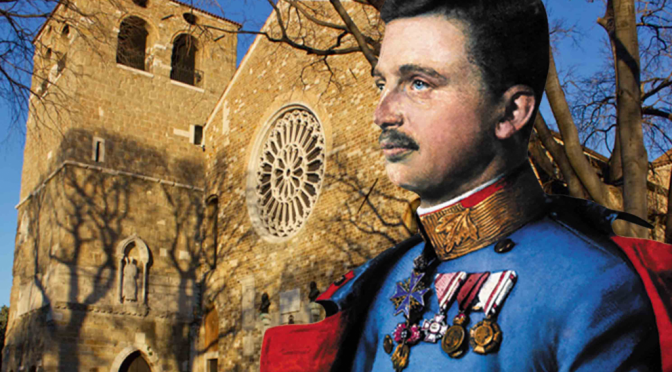 Whoever knows the real history of the city and free port of Trieste (without the distortions of Italian nationalistic propagandas) knows that this maritime capital city of Mitteleuropa owes everything to the House of Habsburg, from political and military protection, which started in 1382, to the development of the port, of demographics and economic in a plurality of languages, cults and faiths from the beginning of the 18th Century to World War I.

Instead, the successive Italian administrations brought to Trieste nothing but nationalisms, emigrations, and economic degradation, and in our days the ancient historical and geopolitic connections of the people who live between the Danube and the Adriatic are re-cosolidating in a new Mitteleuropa, as we have written before  (LINK in German, in English).

This means Trieste has very strong historical and modern reasons to remember and revive the memory of the world of the Habsburgs, and this is also happening with a series of meaningful historical reflections and commemorations between October and November 2016, one hundred years after the death of Emperor Franz Joseph and the succession to the throne of Karl I, as well as for the three centuries from the birth of Empress Maria Theresia.

The main public events are five, from the 20th of October to the 21st of November:

Thursday 20th and Friday 21st October in the eighteenth-century villa Sartorio, the study convention “Le città dell’imperatrice” (The Empress cities) starts the cultural initiatives that the Municipality of Trieste is developing in 2017 for the 300 years from the birth of Maria Theresia;

Saturday 22nd October, at 5PM, the anniversary of the beatification of the last Emperor, Karl I of Habsburg, is celebrates in the Cathedral of San Giusto with a solemn Mass in the presence of his grandson Archduke Georg Habsburg-Lothringen, Hungary’s Ambassador extraordinary and  President of Red Cross in Hungary (with Henri Du Mont’s Messe Royale for voices and organ, with the “Sacri Cantores Theresiani” from Gorizia and the “Brass Quintet Serenade Ensemble”);

on 4 November, since 4PM, at the Palazzo della Borsa (palace of the Stock Exchange) in Trieste historical exhibit a “Kaiser Karl I – l’Imperatore della pace – Kaiser des Friedens – Cesar miru” (the Emperor of Peace), organized by the Central European Institute for History an Culture with the chamber of commerce and Consulate of Austria. The exhibit reminds the exhausting but constant commitment of Karl I to end World War I, and it can be visited until the 21st of November.

on 6 November, at 11, in the Austrian-Hungarian cemetery of Prosek-Prosecco, on the Karst plateau of Trieste, Civiltà Mitteleuropea and Trieste Libera – Free Trieste hold the traditional, charming multi-lingual and multi-confessional commemoration of the Austrian-Hungarian Fallen and fighters of Trieste, of the Austrian Littoral and of the people united as brothers and sisters to them in World War I, with Christian (Catholic, Evangelic, Orthodox), Jewish and Islamic rites;

on 21 November at 7PM in Trieste, a solemn Mass at the Church of N.S. della Provvidenza e di Sion (Our Lady of the Providence and of Sion) celebrates, in the centennial of his death, the memory of Emperor Franz Joseph I, who during the 68 years of his reign aimed at peace and justice for all of his people, defending them from the political, national and religious persecutions that would devastate them after the dissolution of the cultural, religious and economi balances of Austria-Hungary.