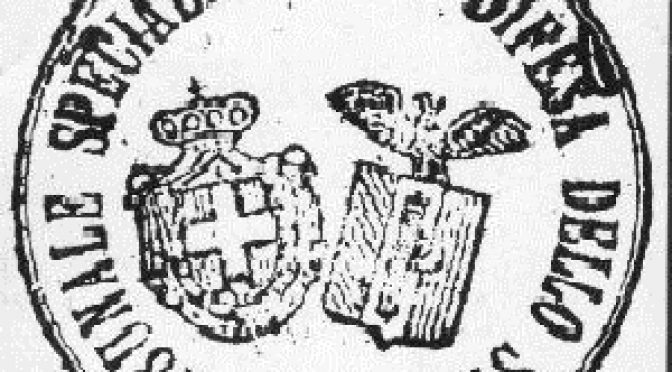 This is the stamp of the “Special Court for the Defense of the State” which in Trieste, during the Fascist Regime, was responsible of the harsh repression to eradicate the multicultural roots of the Habsbourg’s city. The Special Court of Trieste had the power to warn, to scare and to convict political opponents who were considered dangerous for the Regime’s own order and security.

On Monday, 24 October 2016, took place a new hearing of the trial to the 17 citizens of the Free Territory of Trieste who are charged with taking part to a demonstration for the protection of the international Free Port of Trieste that allegedly was not authorized by the Italian police. The facts date back to 10 February 2014, when hundreds of activists of the Free Trieste Movement had joined in a peaceful event to temporarily close the entrances of the Northern Free Port (the “Old Port”), which had been opened by Italian authorities.

The opening of such entrances served as an excuse to merge the whole port facility with the urban area by transferring its ownership to the city. A completely illegal operation, since the hole international Free Port of Trieste is established with this status by virtue of the 1947 Treaty of Peace with Italy and of Resolution S/RES/16 (1947) of the United Nations Security Council.

A port, corporation of State of the Free Territory of Trieste and therefore not subject to Italian sovereignty, that since 1954 is entrusted under the responsibility of the Italian Government, that administers it temporarily and must grant its integrity by virtue of an international mandate. But the State of Italy, which makes a mockery of international agreements, decided to try a coup, to annex the whole Old Port, presenting it as a fait accompli: essentially, a defeated Country wanted to force a change to the Treaty of Peace.

This annexation had at least two purposes (other than annihilating the present-day Free Territory of Trieste): to allow a massive housing speculation that would allow money laundering and destroy the economy of Trieste (as I wrote in this port) and to downgrade the port of Trieste diverting its traffics to the Italian ports of the Adriatic (as reminded in this analysis of investigative newspaper La Voce di Trieste).

The firm opposition of the citizens of the Free Territory of Trieste to this operation was decisive, and it made public opinion aware of a situation that is very inconvenient for the Italian authorities that were involved in allowing this massive fraud at the expenses of the whole international community.

And it is right those hundreds of people that on 10 February 2014 stood firm to defend the Old Port, protecting with their own body that international area from the attack of the State of Italy, were the first barrier of legality that stopped the arrogant prepotence  of a State that is not used to come to terms with its unpleasant past of Fascist dictatorship, never truly transitioned to democracy.

Those citizens were the first dam to break the waves of the Italian system of corruption. A dangerous example that an antidemocratic regime cannot stand. So, obviously, there was a reaction, entrusted, as usual, to judicial authorities, only to have a facade of justice for what is nothing more than mere repression of civil rights.

A repression who nature subverts the very Italian legal system, since the magistrates who act against harmless citizens have no fear to trample on the very laws of the Italian State that they would have respected, not last the Italian Constitution, which implements international agreements.

This is why we are under trial, or, even better, why 19 people are under trial. 19 our of the hundreds who peacefully demonstrated on that day. A symbolic “decimation” decided not to create a stir on such a delicate and burning question, the only illegal part of it being the behaviour of Italian authorities, all of them.

A punitive trial, “lead” with a specific strategy of tension and militrized since the real beginnig to scare the citizens of the Free Territory, and two of the people on a separate trial, despite being charged with the same crimes as the other 17, only to convict them as soon as possible to attempt influencing the main trial.

A conduct worth the Special Courts of the Fascist era, at the expenses of harmless citizens, of another State, as the meta-regulation of the law is reverted.

This was clear on Monday the 24th, at the 5th hearing of this trial, with which Italy would want to affirm its means of antidemocratic police State in the Free Territory of Trieste.

By now, the hearing do always take place in the afternoon, when the Courthouse is empty, to miminze the effects of the protests of the citizens. Because, intimidated or not, dozens of people come to the hearings while the media, controlled by the regime, must not even broadcast news about it. Complete silence for a thorny trial that the protectors of the system of illegality barely stand.

Once again, the clima is “harsh”. In order to discourage the people from attending to a trial that, no matter what, is public, Italian authorities do all that hfey can. In the afternoon, only the side entrante of the Courthouse is open, the main one is shout. And the one that stays open is well controlled. If one wants to assist to the trial, they must be subjected to the Caudine forks, made of cross-controls by Carabinier, Police and DIGOS (the political police is in plainclothes). You need a pass to get in, your document must be given in exchange of it; I refuse to give mine, since I am the one under trial. The police lets me in, but they are embarrassed.

The hearing is even more controlled. Police and Carabinieri are in the courtroom and in the corridor.  They follow the people even to the restrooms. But the only outsiders here are those who stand on the wrong side, as they are protecting a system of Government that is nothing but illegal.

The judge completes the task to break procedural rights informing the people that only the people under trial can get into the courtroom. But how can one discuss with police and Carabinieri with weapons, who watch harmless citizens whose only strength if the law?

I enter the courtroom, at least I can. I am under trial. Maybe they think I am intimidated by their show of strength. But hfey did not. I start speaking, now I stand alone before the judge. I ask him to tell which jurisdiction is he exercizing: is he a judge of the Italian Republic (which has no power here), or is he correctly entrusted by the provisional administering Government of the Free Territory?

The judge interrupts me many times, he wants me to stop. But I don’t let him intimidate me, and I declare the illegality, nullity and voidness of all decisions of Italian judicial authorities in Trieste, as well as the falsifications of the Treaty of Peace committed by Italian magistrates to simulate Italian sovereignty over the Free Territory of Trieste. I end my declaration stating that I do not recognize the Court’s authority and I leave the Courtroom, followed by the other caused persons who belong to the Free Trieste Movement: we don’t give up.